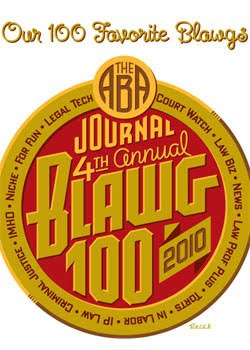 We here at Abnormal Use are very pleased to announce that our humble blog was selected yesterday for inclusion in the ABA Journal‘s Blawg 100, the “annual list of the best of the blawgosphere.” It was less than a year ago, in January, when we began this fateful enterprise, and we’ve posted each business day since that time on the latest products liability cases and news. Now, after nearly 250 posts, almost a dozen interviews with law professors and practitioners, and a sizable quantity of Friday Links, we’re not quite veterans, but we believe we’re starting to get the hang of the slings and arrows of this blogging thing.

When we first heard the news we weren’t quite certain how to react. We tried to play it cool, but we were never successful at creating such a facade. Cynical as we purport to be, we’re actually rank sentimentalists at heart, and we’re quite honored to be included among the other seven torts blogs, those being the Boston Personal Injury Lawyer Blog, the Drug and Device Law Blog, the FDA Law Blog, Jackson on Consumer Class Actions and Mass Torts, Marler Blog, New York Personal Injury Law Blog, and The Pop Tort. We’re still a little shocked.

This project would certainly not have been possible without the support of our firm. Kudos also go to our two principal authors Phil Reeves and Stephanie Flynn, as well as our five associate contributors: Kevin Couch, Jim Dedman, Mary Giorgi, Laura Simons, and Frances Zacher. We also thank former contributor Dan Eller for his work on the project during 2010.

Further, we would not be what we are today without the support of other blogs, including the Drug and Device Law blog as well as the Overlawyered and Point of Law blogs, all of which served as an inspiration to us as we prepared to enter the blogosphere just over a year ago.

Finally, we thank everyone who nominated us for inclusion in the list. We’ve got just one more favor to ask. After announcing the final 100 blawgs, the ABA Journal is now asking its readers to vote for the best of the final 100 in 12 substantive categories. Our blog is included in the Torts category, and we ask that you register at the ABA Journal‘s site and cast a vote for us here.

And if that’s not enough, we’ve got some big things in store for you in the coming weeks. Don’t forget: You can follow Abnormal Use on Twitter at @gwblawfirm. (In fact, check out our GWB 2.0 website for all of our social media endeavors as a blog and law firm.).

Thank you again, dear readers, for your visits to our site and support. We very much appreciate it, and we are looking forward to bringing you another year of commentary in 2011.

We here at Abnormal Use have officially hit our first milestone and are, as of today, 100 posts old. To commemorate the first of what we hope will be many such anniversaries to come, we pause to reflect on where we started, and what we have learned along the way.

It has been just four short months since we unveiled this products liability blog with a formal mission statement. Whereas we feel certain that blogging may come naturally to some, our first foray into the blogosphere was not without some trepidation. Naturally, we asked ourselves: Will there be sufficient source material? But we quickly learned that this was the least of our concerns. Fortunately for products liability bloggers, in the rapid, ever-changing world of litigation, there is rarely a day that passes without something newsworthy, whether it be a new court decision, an interesting verdict, a product recall (an augury of imminent litigation), or a story on a future Plaintiff’s new and “inventive” use of a product that, predictably, went awry. Needless to say, we have found plenty of cases and news items about which to post. We are also proud to have presented several original interviews with law professors in our series which we affectionately call Abnormal Interviews (more of which are to come in the future).

Branding ourselves the authors of an “unreasonably dangerous products liability blog,” we’ve also attempted to inject a bit of humor into our posts, at least every once in a while. We have, of course, enjoyed sharing our light-hearted Friday Links. We also hope that you will remember what, for us, became one of our most infamous posts. On February 3, just a few weeks into this enterprise, we posted what we fondly refer to as the the chicken sandwich post, a reflection on the Fourth Circuit’s opinion in Sutton v. Roth, L.L.C., a case that evolved out of yet another instance of a hot item becoming a dangerous instrumentality. Then, of course, we could not resist an April Fool’s Day post. In keeping with our food-related theme, we decided to reflect on whether a Snickers really satisfies (“Unsatisfying Snickers Bar Unreasonably Dangerous and Defective, Texas Court Holds“). Whereas most of us here would agree that a Snickers bar does indeed satisfy (roasted peanuts, nougat, caramel and chocolate!), gone are the days when we as attorneys would actually be surprised to see a lawsuit that would seek to challenge what has been and still is a highly successful marketing campaign for Mars, Inc. (Just check out Betty White’s appearance in Snicker’s Superbowl commercial!). Apparently, the post did actually fool a few readers, as we received a missive or two asking if the post was, in fact, reality.

We cannot observe this anniversary without pausing to thank others in the blogosphere who have both supported and inspired us. Special thanks go to James M. Beck of the Drug and Device Law Blog and Walter Olson (of both Overlawyered and Point of Law) for their support.

This is not to say that the blog is always fun and easy. This site has now become a daily part of our professional existence – yet another generator of deadlines. Sometimes, it is a joy. Other times, though, it is simply one more item to check off of an already lengthy to-do list. Mark Herrmann (former author of the Drug and Device Law blog) warns of the perils of lawyer blogging in his recent article “Memoirs of A Blogger“). We’ve taken some of these concerns to heart, but we’ve also attempted to fashion a blogging infrastructure here that avoids some of the issue Herrmann presents. (Certainly, dividing the work amongst seven attorneys makes the task a bit less daunting.). But, in any event, we have been gratified and encouraged by the feedback that we have received and the knowledge that we have acquired throughout this project.

Despite this anniversary, we are only getting started. Thanks to all of you for visiting the site, and we look forward to bringing you much more products liability commentary in the future.